The man I can’t stop thinking about

This month I was lucky enough to meet a man that made a tremendously deep impact on me and I can’t shake the image of his face from my mind.  Please allow me to introduce Hamit, an entrepreneurial pig farmer living in the Korca region in the south of Albania that I had the pleasure of meeting on a recent field visit. 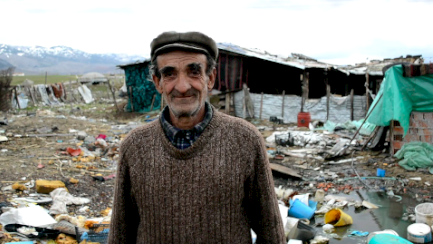 Hamit, a sixty-five-year-old Romani man from the Roma ethnic community of Albanian, showed me exactly why Kiva is desperately needed in Albania.

I know when I first found out I was being placed in Albania I was not sure what to think. I knew Albania is being considered for candidate status for the European Union, and my guidebook told me there is an Albanian Riveria so naturally I thought does microfinance and kiva capital really have a place here? I will confess here among friends, I was even a little disappointed! I was getting ready to completely change my life to work towards the alleviation of poverty, and to me on first glance eastern europe seemed like it was doing just fine.

Enter Hamit. As part of the Roma ethnic group, Hamit would be unable to get a loan from a traditional financial institution or even most microfinance institutions. You read that correctly, no one would lend to him simply because of his ethnicity. Much of the population in Albania perceives the Roma as a sterotypical group of people with a non-committal attitude towards work that continually abuse of the state’s welfare system, as well as a group that has a high propensity towards aggressive begging and high involvement in crime. This institutionalized discrimination against the Roma makes a large portion of them lose interest in participating in mainstream Albanian society.

For most people their exposure to the Roma population doesn’t go beyond seeing Roma in the streets.

Visionfund Albania, the Kiva partner I am working with here, with Kiva funding has been able to establish a loan product that specifically is designed to target the vunerable population of Roma’s living in Albania like Hamit and his family.

Getting out of the car infront of Hamit’s house I was immediately struck by the contrast between the piles of trash and rooting pigs set against the harsh jagged beauty of the mountains in the Korca region. The seasons are changing over to spring, but you would have never known that from the icy wind that was blowing across the fields.

When I met Hamit, he was in the process of building his new house financed by a kiva loan but still currently sleeping on a mattress on the floor of a shack made of plastic nailed with thin plywood and covered with metal sheet that does not have water, electricity or a toilet. He is afraid to move into his partially completed new house with the rest of his family as it is further away from the barn where his pigs live and he is afraid someone will steal the piglets.

The shack where Hamit is living

The house under construction that Hamit is building for his family.

Talking to Hamit you quickly realize that he takes his business and his pigs very seriously. He watches over them like an anxious proud father, making sure they stay safe and protected in the shed. He does not allow them to become tainted by going outside to eat garbage like his neighbors pigs that we saw when we arrived. 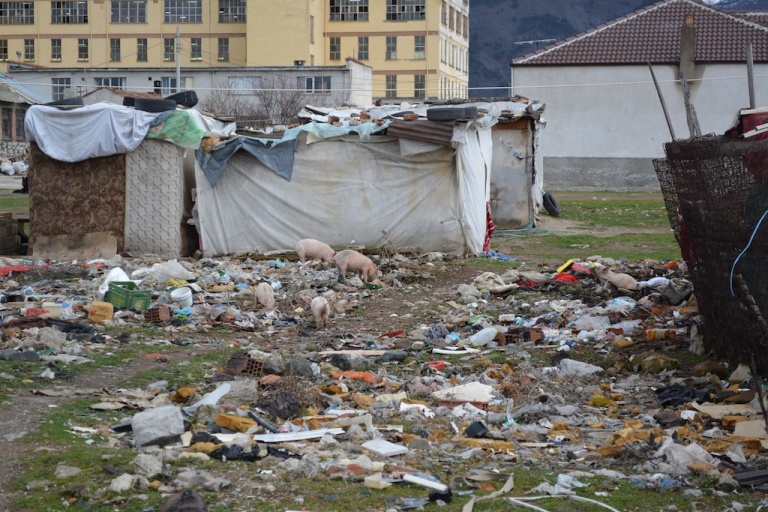 Last year Hamit suffered a very large setback in his business, which caused a delay in the construction of his house, when 60 of his pigs passed away unexpectedly. He had gotten them vaccinated and it turned out the vaccine the vet gave them was bad which caused his entire crop of piglets for the year to pass away so he had to start again this year from scratch. Unlike in the developed world where Hamit would most likely sue the veterinarian and have a legal recourse, in Albania without the resources to fight this injustice, Hamit and his wife just had to start over. As a father of seven and grandfather of more, there is simply too much work to be done to look back and Hamit told me he just hopes for better for this year.
Hamit and his family are more intimately familiar with hardship and suffering than most people in the developed world will ever be including what they faced several years ago when their grown up daughter pass away due to a an illness brought on by poor living conditions. However, the incredible thing is they haven’t lost hope at all and if anything are more excited by the possibilities of the future than anyone I have met in a long time. They are anxiously planning the next phase of the home building the sale of this latest group of piglets.

I wanted to take one of these bundles of cuteness home so badly! Is there anything cuter than a pile of piglets?

When I first moved here and was talking to new friends about my job and the topic of lending money to the Roma population came up; the overwhelming consensus was that the Roma would never pay back their loans. Thanks to the hard work of Hamit and others like him, I am able to smile and tell their incredible story of perseverance and commitment to their businesses and their familes – a story that is proving that people who discriminate aganist someone based on their ethnicity are dead wrong.
The next time you are considering making a loan on Kiva, give Albania a chance. What you find here might surprise you.

← Off the beaten track in Albania
Paradise found! You’ll never guess where… →

3 thoughts on “The man I can’t stop thinking about”