3 Remarkable things I learned in Kosovo

My first mind blowing experience in Kosovo happened almost immediately when my feet touched the ground getting out of the bus in Kosovo – what an introduction to a country!

Having emerged from the shadow of a war that divided ethnic communities in the Balkans just over a decade ago, Kosovo considers itself to be the baby of Europe – having declared independence as recently as 2008. Kosovo has still not been formally recognized by a large number of states, including neighbor Serbia.

Despite all of the reading I had done before actually deploying to my field placement, I still felt like I had no idea what to except in this country that so recently emerged from a violent ethnic conflict. In this blog forum I am not able to give a recap of the recent history with the attention it deserves but if you are interested in learning more I highly recommend taking a look at the nicely documented timeline of events of the Kosovo War complied by Frontline and PBS, click here.

Have you ever had someone approach you on the street and just shake your hand just because of for your nationality and demand to take you for a coffee?

On my recent trip to visit Kosinvest, a Kiva field partner in Kosovo, I had gotten dropped off by a minibus in the smaller town of Gjakova and was looking for my connection bus to go on to the capital of Prishtina when I was approached by a dapper looking older gentleman who I though for sure wanted to offer me a taxi ride, a room in his pension or some other service. I was pretty bewildered when he asked if I was American. I replied that I was, a bit nervous and unsure where this was going as American travelers know we don’t always have the best reputation abroad. The next thing I know, he is shaking my hand and thanking me personally on behalf of all of Kosovo. This was a fairly awkward experience for me, what did I deserve to be thanked for?  This wasn’t the last time on that trip, and it really wasn’t something you get used to experiencing.

Surprise #1.5- George W. Bush and Bill Clinton both have a place here in the peoples hearts.

Kosovar Albanians love Bill Clinton for his support of the 11-week NATO bombing of Serbia in 1999, which led to the Serbian military withdrawal from Kosovo and the placement of the province under United Nations administration, and George W. Bush for supporting Kosovo’s declaration of independence from Serbia in 2008. Prishtina is probably the only city in the world with boulevards for both Bush and Clinton. 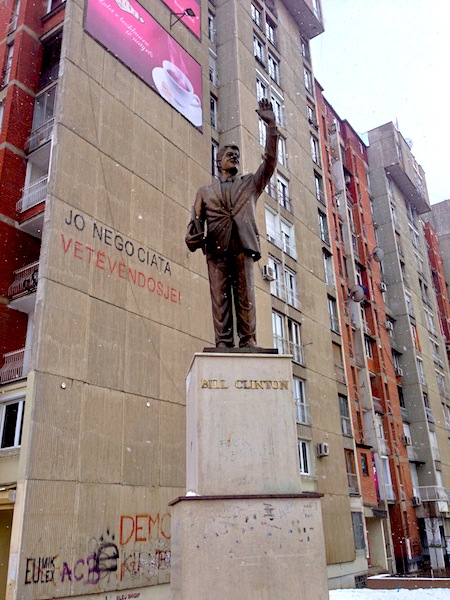 Surprise #2 – Serbian and ethnic kosovar Albanians work side by side.

Given the recent violent history of Kosovo, I wondered what would the atmosphere be between people in the field? Kosovo still comes up regularly in the news in particular the northern city of Mitrovica (an area my contract with Kiva doesn’t allow me to travel in) with reports of violence between the Serbian community who live the north of the divided city and ethnic Albanians that live in the south. Earlier in my fellowship I had the chance to travel to the southern part of Mitrovica and wrote about it here. Two days after I was there, a grenade was launched that killed two Serbian children, it was sobering experiencing for me to say the least and was one of my first lessons learned in Kosovo.

Most of the communities live separated by ethnic origins, but I spent several days interviewing Kiva borrowers where everyone in the car (except me) spoke both Serbian and Albanian and had no problem moving fluidly between both communities. Kosovar Albanian loan officers work side by side with Serbian loan officer, making jokes, sharing lunch and in general being friends and it was such a good sight to see.

However far Kosovo has come there are still lots of progress to be made and seeing a town with both a mosque (typical of ethnic Albanian communities) and a Serbian Orthodox church side by side was still a really notable site.

Third surprise – The amazing enduring sense of humor, resilience and vitality that the people have

I really feel lucky to meet Kiva borrowers and I hate to pick favorites but when I met Gani I couldn’t help it!

Despite all of the history and hardship that he had seen during his long lifetime he told me the only time you shouldn’t be smiling and making jokes when you are in the graveyard. I asked him if he meant at someones funeral, and he clarified even there you should be smiling and enjoying the life, the philosophy applies to everyone – except the one being buried.

Not just kiva borrowers but everyone I met, everyone is hustling to make a living. I literally met some of the hardest working people I have ever have the privilege of knowing in Kosovo. Throw those lazy balkans stereotypes out the window please! Although I won’t deny that there is always time for an espresso break (and the coffee here is incredible!) – let’s not get crazy here. As Gani told me and I am telling you, it is important to enjoy the life we have been given.

This post was originally posted to the Kiva Fellows Blog seen here.

← A beautiful day trip from Tirana? It depends.
Saving the best part of Albania for last →