Visiting the greek gods on their home turf

I never expected to find myself staring up at Mt. Olympus, the mythological home of Zeus and the other Olympian gods, thinking yeah today is the day I am going to insert “climb a fairly substantial mountain” (ie. approximately 2900 meters) in the middle of my otherwise pretty laid back travel itinerary. 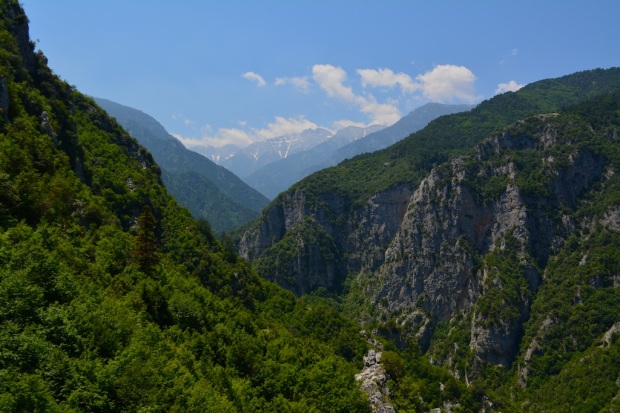 Olympus is somewhere up there?? It is always a little nerve wracking when you can’t even see the place you are supposed to climb too.

While I have been living in Tirana for the past few months my exercise regime has pretty much consisted of lots of city walking, some light weekend hiking and some casual jogging a couple of times a week (mainly to attempt to minimize excessive weight gain from all the lamb I was consuming) – in hindsight the goal of summiting Olympus seems a bit crazy.

There are two ways that you can start the Mt. Olympus adventure. You can choose to be pretty hardcore (my personal opinion but it was validated by many others) and start from the village of Lithoro which is about 19km to Refuge A where you spend the night before making the summit attempt or you can start in Prionia which is about 7km from Refuge A. Us three girls set off from Lithoro – we made it to Refuge A but I will be the first to admit it was far from sexy towards the end.

The benefits of starting from Lithoro include stopping at the holy cave and also seeing the springs of Dionysus (sadly curious readers these were not springs of wine – not sure the team would have made the summit if this was the case) and walking along a gorgeous river which for  some reason I do not appear to have any pictures. 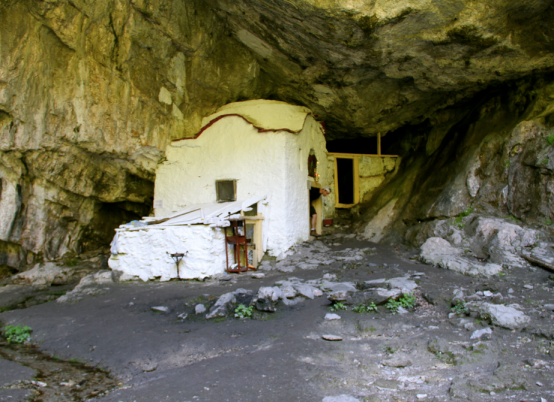 We also found ourselves hiking under the light of the full moon for the last hour, which is not as romantic as it sounds when you are going up tricky loose rock shale trails. We could see the light of Refuge A from the bottom and it looked deceptively close – however it actually took us two hours. We considered the idea that we might be seeing a mirage at points. 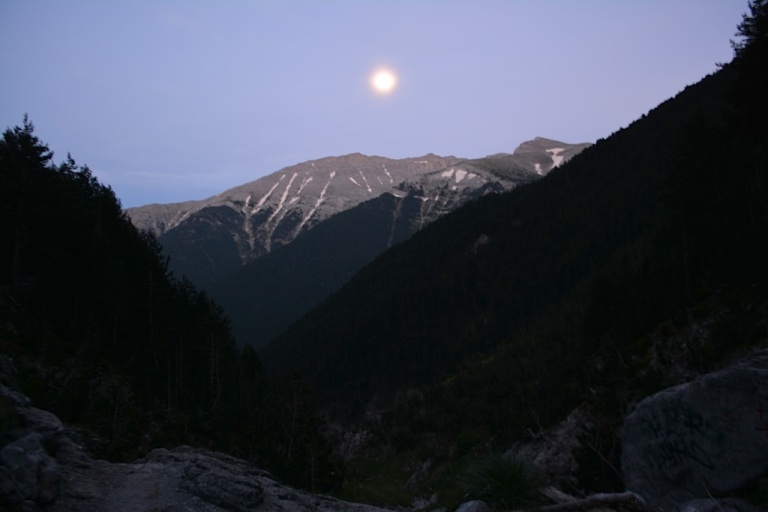 The moon rising, signaling how over our heads we were.

Sadly by the time of night we arrived they had stopped serving dinner, so after all of our labor we were only rewarded with the cold tuna we had carried up and some snickers from the limited snack shop. I did bring a special supply of honey raki which we all were pretty grateful for in celebration.

Throughout the whole trip, even during the difficult moments it is just impossible to deny the beauty of the landscape. I spent the majority of the time just continually stunned by the sheerly breathtaking scenery (pun intended!). 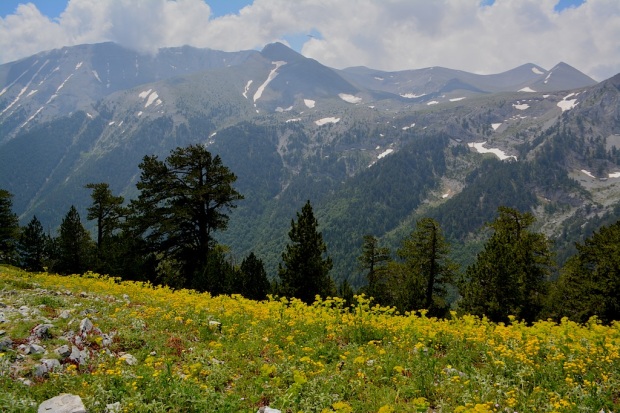 Refuge A was an oasis after all day hiking and we joined the rest of our group who had started from Prionia that afternoon. There is nothing like climbing a mountain to bring people together. In our little group we had two American girls, one dutch girl, a british guy, one Lithuanian and one italian girl, truly an international climbing team. I would like to point out the girls outnumber the boys, go cool climbing ladies!

Breakfast before our summit attempt. From left to right: me, Nina (Holland), Alex (UK), Emma (USA), and Alice (Italy). Paul (Lithuania) was kind enough to take the photo.

Refuge A in the morning light. 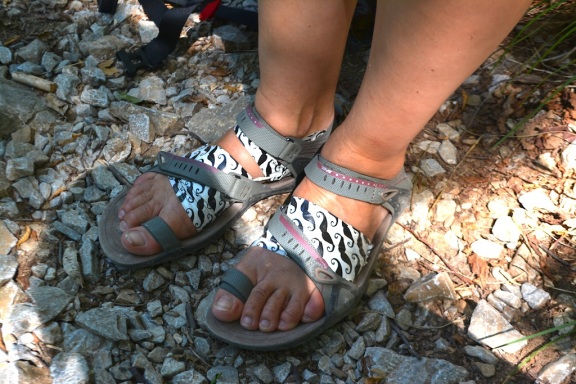 Nina’s feet. She hiked the whole way to refuge A in these without complaining – what a dutch badass. Yes that is totally mustache duck tape.

The next day is where limits were tested and boundaries were pushed.. Up, up, up we went, pushing already tired legs to give just a little bit more. After the really long day hiking the day before, and a not so great sleep in the one large bunk bed we were sharing (basically five bunk beds all pushed together to form one giant one) keeping going was not easy!

Nothing is as beautiful as sunrise in the mountains.

The trail was pretty relentless, at points we literally were counting steps to try to distract ourselves and keep making progress. 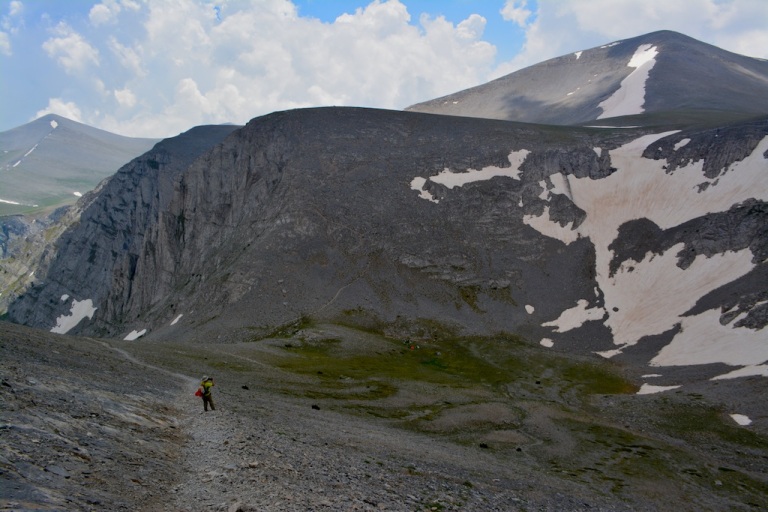 No matter how I tried, I just could not take a picture that shows the true steepness of the trail. 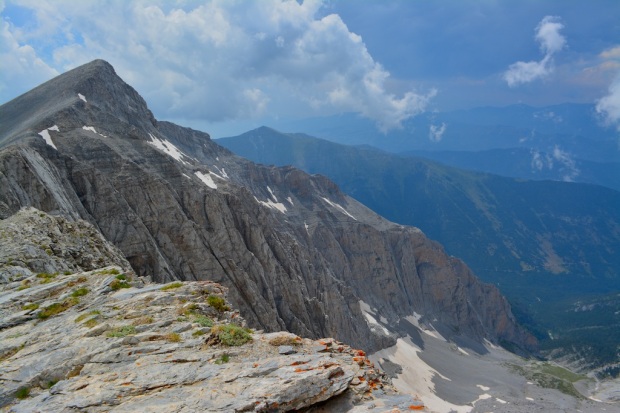 Rest assured gentle readers, we made it!!

I am just a wee bit excited – can you tell?

Reaching the summit of Olympus was one of the sweeter moments during my time in the Balkans so far and the victory swim and beer once the group finally made it back to the hostel can only be described as absolutely magical. Want average beer to taste like the gods themselves brewed it? Just climb 2900 meters and then crack that can with confidence – I am sure this method is foolproof.

← What do greek anarchists do on sunday? Answers to that and other questions found here.
Five ways El Pais Vasco is better than the rest of Europe (and probably the world too…) →